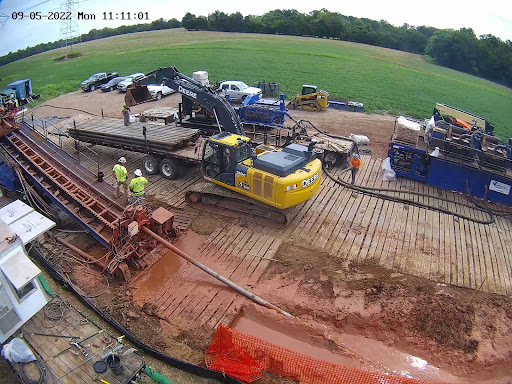 Most recently in July 2022, Quantum Loophole announced it began construction on its QLoop network, a 40(+) mile hyperscale fiber ring connecting Quantum Frederick’s 2,100+ acre data center development site in Maryland to the Ashburn, Virginia Internet ecosystem. In August 2022, the first of two under-the-Potomac river borings was completed. This is a significant advancement as it is the first boring of the Potomac completed in many years and is positioned more than 90 feet under the bedrock of the river. The approximately 3500 foot boring begins with a 12-inch pilot hole that is now completed – the implementation of its 26-inch outer diameter sleeve will be installed after a back reaming process.

Within the first year of the company’s land acquisition announcement, construction on the Quantum Frederick data center development site began in June 2022. The ceremonial groundbreaking consisted of dignitaries and industry luminaries planting trees at the site, while mature trees were relocated to create a more environmentally appealing view point. Since then, onsite construction work for the sewage system, water, underground power facilities, network conduit rings and removal of materials from the site is well underway.

In May 2022, Aligned Data Centers became the first company to publicly announce its interest to develop a data center in Maryland. In June 2022, The Tech Capital Global Awards recognized Quantum Frederick as the Location Award winner for 2022.