Measuring and Monitoring: Apps and Stacks 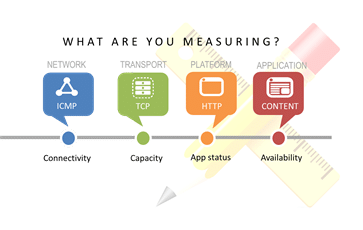 One of the charter responsibilities of DevOps (because it’s a charter responsibility of ops) is measuring and monitoring applications once they’re in production. That means both performance and availability. Which means a lot more than folks might initially think because generally speaking what you measure and monitor is a bit different depending on whether you’re looking at performance or availability*.

There are four primary variables you want to monitor and measure in order to have the operational data necessary to make any adjustments necessary to maintain performance and availability:

App Status and Availability can be measured either actively or passively (in band). When measured actively, a monitor initiates a request to the application and verifies its response. This is a “synthetic” transaction; a “fake” transaction used to measure performance and availability. When measured passively, a monitor spies on real transactions and verifies responses without interference. It is more difficult to measure availability based on application content verification with a passive monitor than an active one as a passive monitor is unlikely to be able to verify responses against known ones because it doesn’t control what requests are being made. The benefit of a passive monitor is that it isn’t consuming resources on the app instance in order to execute a test and it is measuring real performance for real users.

You’ll notice that there’s a clear escalation “up the stack” from IP -> TCP -> HTTP -> Application. That’s not coincidental. Each layer of the stack is a critical component in the communication that occurs between a client and the application. Each one provides key information that is important to measuring both performance and availability.

The thing is that while the application may be responsible for responding to queries about its status in terms of resource utilization (CPU, memory, I/O), everything else is generally collected external to the application, from an upstream service. Most often that upstream service is going to be a proxy or load balancer, as in addition to monitoring status and performance it needs those measurements to enable decisions regarding scale and availability. It has to know how many connections an app has right now because at some point (a predetermined threshold) it is going to have to start distributing load differently. Usually to a new instance.

In a DevOps world where automation and orchestration are in play, this process can be automated or at least triggered by the recognition that a threshold has been reached. But only if the proxy is actually monitoring and measuring the variables that might trigger that process.

But to do that, you’ve got to monitor and measure the right things. Simply sending out a ping every five seconds tells you the core network is up, available and working but says nothing about the capacity of the app platform (the web or application server) or whether or not the application is actually responding to requests. HTTP 500, anyone?

It’s not the case that you must monitor everything. As you move up the stack some things are redundant. After all, if you can open a TCP connection you can assume that the core network is available. If you can send an HTTP request and get a response, well, you get the picture.

What’s important is to figure out what you need to know – connectivity, capacity, status and availability – and monitor it so you can measure it and take decisive action based on that data.

Monitoring and measuring of performance and availability should be application specific; that is, capacity of an app isn’t just about the platform and what max connections are set to in the web server configuration. The combination of users, content, and processing within the application make capacity a very app-specific measurement. That means the systems that need that data must be aligned better with each application to ensure not only optimal performance and availability but efficiency of resources.

That’s one of the reason traditionally “network” services like load balancing and proxies are becoming the responsibility of DevOps rather than NetOps.