As Banking M&A Heats Up, Cloud Computing Can Be a Deal Saver!

Financial services organizations are banking on cloud computing. According to a recent report by 451 Research, banks are making a major shift toward the cloud as their primary computing platform. Cloud is seen as a panacea for a range of needs, including efficiently scaling IT infrastructure, modernizing applications to better serve mobile-minded customers, and deriving business value from emerging technologies like artificial intelligence.

While many financial services companies have taken a cautious approach to their cloud implementations due to the industry’s strict security and regulatory compliance standards, the 451 Research report shows that banks are excited by the cloud’s ability to make them more agile, deliver better services through digital channels, and stay competitive in a market that’s being transformed by new, cloud-native competitors.

However, the cloud’s benefits for banks don’t stop there. At a time when many experts are predicting an increase in merger and acquisition activity in the banking sector, the cloud can eliminate key technical obstacles that can slow or even ruin a merger’s success.

This is especially relevant as the banking sector appears to be on the verge of increased M&A activity in 2019. Banks look to add customers, gain market share, and expand their technology capabilities. In addition to those factors, regulatory-loosening legislation that went into effect last year is seen as encouraging M&A activity, as are the sustained bull market and lingering effects of the U.S. tax overhaul, which has helped boost bank profits to record levels.

The value of mergers and acquisitions in the U.S. financial-services sector more than doubled in 2018, to $196.5 billion from $82.3 billion in 2017, according to an analysis by Ernst & Young.

If this predicted a new wave of M&A comes to fruition, more and more banks will face the obstacle that inevitably confronts every enterprise in any industry post-acquisition: bringing together the IT systems of both companies.

They’ll have to deal with challenges such as seamlessly integrating data between the banks’ clouds, combining security systems, and assorted other details in converging two complex IT organizations – all of which need to be done as quickly as possible.

This work is so difficult, often taking years to accomplish, that it can damage or even derail an M&A’s success. A notorious example is Banco Sabadell’s acquisition of British bank TSB, where IT integration problems last year were blamed for service disruptions and customers being able to inadvertently access the accounts of other TSB users.

However, the cloud offers a number of benefits to banks undergoing a merger that make integration easier. These include:

Speed: With cloud technology, it’s simply faster to exchange data and integrate apps in cloud environments and secure them with a common set of cloud-native security protocols.

Flexibility: Cloud enables banks that are merging to smartly separate workloads into different environments depending on what will make the integration easiest. The merged banks can take advantage of multi-cloud — an architecture that uses a combination of on-premises resources, private cloud, and public clouds – to smartly separate workloads into the different environments depending on their specific requirements. Rather than the costly and agonizing effort of hard-wiring custom-built systems together, cloud empowers quick decisions about what the integrated IT should look like.

Scalability: If the merged banks find it necessary to increase capacity, the cloud makes it easy to scale up. The new company doesn’t have to worry about buying more servers; it just needs to break out the credit card, so to speak, and acquire more capacity from a cloud provider. This simplicity can limit or eliminate downtime and service interruptions as the two banks integrate.

These qualities are especially important for financial services companies, which face significant security and compliance requirements. Banks lack the luxury of making any mistakes in this regard during post-merger integration, and the cloud can ensure that the process goes smoothly.

By eliminating so much of the pain in integrating systems after a merger, banks can focus more on business issues and less on IT as they move forward. 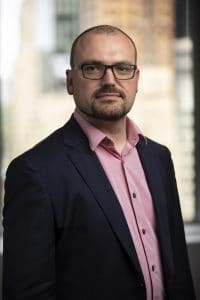 Stephan Fabel is Director of Product at Canonical, the company behind Ubuntu. He has over a decade of hands-on cloud architecture and product management expertise, starting with running one of the first production OpenStack data centers at the University of Hawaii.